To all you famous writers, actors, musicians, politicians, TV-journalists, athletes etc. out there:
Thanks for being such a great part in forming the world we all live in. So many of us use the time we have on this earth to complain or watch TV instead of trying to make a difference.

But I really don’t see a point in all those reality shows on TV, with famous people doing something they are not good at – doing something other than the tings they got so famous for in the first place, like dancing or building something.

Therefore:
Famous people! Thanks for all the good you have brought to our lives
– now fuck off and annoy someone else!

Kind regards and the best of wishes
Erik

Recently I have been tidying up a bit. Among a lot of stuff I for some reason haven’t thrown out years ago, but instead just tucked away, I found two small paintings. I’ve got them long time ago, probably because I found them interesting or beautiful, and definitely cheap (I may have been spoiled as a child, but not with money).
One of them was a Chinese drawing. The other was a painting of a fantastic landscape. I’m not sure I’ve noticed it before, but the name of the place was written with small letters at the bottom: Greenland.
I really don’t know if I had any plans of going to either China or Greenland at that time, or if it’s a pure coincidence those two drawings I found, illustrated exactly those two countries I’ve visited in 2006 and 2007.

Some time ago I bought a JVC hard disk drive and DVD recorder, to get rid of video tapes and go digital. The quality of recorded TV has improved a lot – when the recorder actually works.
It has broken down several times now. JVC tries to repair it each time, but they haven’t much success doing that, so after a while I have to return it for yet another repair! During the latest repair, they actually made it worse: now it makes an annoying noise whenever I try to use the recorder.
Should I return it again? Yes, definitely.
Am I going to do that? No, probably not. JVC have had so many chances to either repair the damn ting, or to replace it with something that works. The only reason why they haven’t replaced it after all those attempts must be that they don’t have anything else that works?
Therefore: If you have to buy some Consumer Electronics Products, and you want it to work, then don’t buy anything with JVC logo!

Even with the detailed look on 2007, I can’t find much to say about January. I started a small series of blog posts with photos near my home. The first photo showed the farm that burned almost a year later.

February came and went. It did snow a lot, however.

March … hmmm. I’m afraid I really didn’t have anything to write about. I did manage to make a blog post in handwriting. Something I may try again sometime.

In April, spring came to Denmark, and I learned the hard way, that bamboo is grass (and I’m allergic to grass pollen). It was also the month, I wrote about why I write a blog, and the month I first heard that some visitors got an error message when they tried to write a comment – something I didn’t manage to solve until November. Princess Isabella was born April 22. I showed a photo with two snails which I thought wasn’t that bad, and I tried Twitter, which wasn’t much to write about.

In May, I wrote at bit about how quick things can change. They sure can, but not that month – as I recall, nothing happened there.

In June I bought a new computer. And few days later the hard drive died. Another few days later, the summer started in Denmark. The last blog post that month was me trying to be philosophic.

July was really, really rainy! My garden wall collapsed because of all the rain, so I had very short time to learn how to build a wall. That month I also had to return my new computer one more time, because it still had some problems. But they were nothing compared to the massive trouble I got, when the computer got damaged during the tender care of the Danish postal service. Besides that, HRH Princess Isabella Henrietta Ingrid Margrethe was christened.

August was the month I got my computer back, after a long fight with both the postal service and the computer shop to figure out who should pay for the damage. In the middle of August it was to hot to sit in front of the computer, writing blog posts – and at the end of August I went to China.

In September I returned from an absolutely wonderful trip to China. Travelling is a fantastic way to spend your time! Late in September, the autumn began, and I was told that it was ten year since I got the nickname Baseman.

Not much to tell about October.

In December I tried to write about an incident where I wasn’t nice. Maybe not much in the way of revealing journalism, but to me it was a milestone: I’ll try to tell more about myself in 2008 – some of all the good, the bad and the ugly.

The beginning of 2008 went so fine: nice weather, nice fireworks. Few hours later, a farm close to where I live, was hit by a stray rocket. The result: 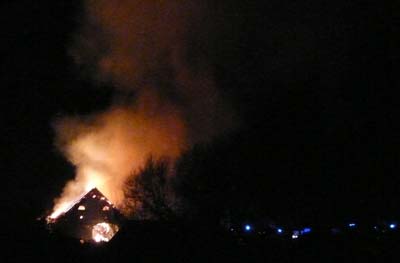 If you want to see the farm as it looked before the fire, then go to some of my earlier blog posts: here and here (the white building to the left).
The building after the fire: 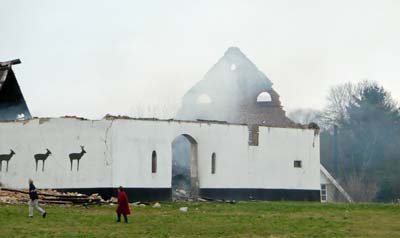 It was offcourse very sad and disturbing to see the building burn down, but luckily, no people or farm animals were harmed. (Maybe some spiders – but they had it coming anyway, being 8-legged and ugly).