This note from The Land Down Under made me think about national identity. Not in the way we think about other people, but how we see ourselves.
Now we are all aware of the world surrounding us, but I think that not so long ago, people living in small countries like – say – Denmark were more aware of other countries and more likely to travel, than people living in countries large enough to be their own continent.
Throughout history, Danes have been travelling. It was a Dane who discovered Greenland – and America (long after the Inuit and the Native Americans discovered the places first offcourse).
But have we become so fine travellers that we tend to loose our origin? Do we need a song like this one to remind us, who we are, so we’re able to find our way back – home?
I do see the contradiction: me talking about Danish identity, and writing about it in English. But this isn’t about Danish identity – it’s about having a place (geographical or at least as a state of mind) you belong to. 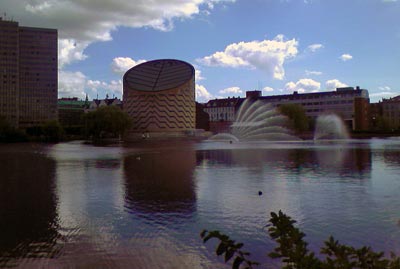 Living with Windows Vista is easy – if you don’t combine it with iTunes / iPod.

Here are some hints to make it work:

1) If iTunes are very slow when you ad new stuff, and maybe even make your computer freeze:
This could happen if the motherboard in your computer is from Intel and has a “raid controller” on it.
Solution: get the latest raid controller driver from intel.com.

2) If you get a message every time you attach your iPod to your computer, saying that Vista would very much like to scan it to fix some problems:
There’s probably nothing wrong with your iPod – it’s just Vista being stupid.
Run this command (in a command prompt or in start):
chkdsk e: /f
(with “e” being the drive letter for your iPod). (Thanks to Rocketman for this hint).

Sorry about the lack of news from me lately.
Part of the time, I’ve been too busy at work; part of the time it’s been too warm to sit in front of the computer; and all of the time, I had great difficulties figuring out what to write about.

This is the second – and hopefully final – part of The Tale of a Broken Computer.

In the first episode (The Computer Comedy, part I) we heard about me sending a new computer back to the computer store, because of a minor defect. On the way it was damaged by the postman.

Confused? You won’t be after this episode! (Or maybe you will)

The computer was returned to the store, and I got the sad news. This could easily mean that I had to pay for the repair. I told the store what I thought about that – and they told me that they could offer to repair the computer for free, so I “only” had to pay for spare parts. Not a wonderful deal.

Then I got a new message from the computer store: it turned out that the computer had been damaged even more, while it was sent to Post Danmark for examination. This time however, the computer store discovered the damage in time, and – surprise! – the postal company accepted to pay! Not the total cost of a new computer, but still enough so I didn’t have to pay anything, because of the computer stores offer to pay the wage.

Yesterday the computer was ready – and I decided to pick it up myself instead of having them to send it to me. I didn’t have the courage to let the Danish postal service have another turn with it.

The universe may
be as great as they say.
But it wouldn't be missed
if it didn't exist.
Piet Hein