A lot of people use Internet the same way they use TV, radio and newspapers: they grab the information others have produced – nothing more.

This strikes me as a little odd since the Internet is intended as a platform for interaction. Not since Speakers Corner, there has ever been a place more dependent on the contribution from the public.

Use the possibilities the Internet brings, but please do not hesitate to contribute with all the fantastic things you know about, have special feelings about or at least have an opinion about.

If you don’t know where to add wisdom to the Internet, you can write it in a comment to this post.

This morning, I put on a t-shirt with a “Tuna” logo (a spoof for a famous brand with another animal). 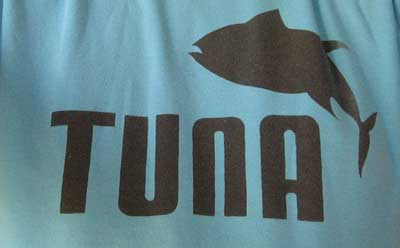 “One day when he was out walking, he came to an open place in the middle of the forest, and in the middle of this place was a large oak-tree, and, from the top of the tree, there came a loud buzzing-noise.
Winnie-the-Pooh sat down at the foot of the tree. Put his head between his paws and began to think.
First of all he said to himself: ‘That buzzing-noise means something. You don’t get a buzzing-noise like that, just buzzing and buzzing, without its meaning something – and the only reason for making a buzzing-noise that I know of is because you’re a bee.’
Then he thought another long time, and said: ‘And the only reason for being a bee that I know of is making honey.’ “

Alan Alexander Milne’s book ‘Winnie-the-Pooh’ was released 82 years ago today, on October 14 1926.
I like bees for the same reason as Pooh Bear: Honey. But this summer, I have noticed a disturbing lack of bees. I have heard about parasites being the reason for a recent decline in the population of bumble bees, but scientists believe that this parasite does not affect honey bees. But it is a fact that the honey industry has been plagued with colony collapse disorder in recent years.

I do not know if another plague is also worldwide or just a local phenomenon. But this year has shown a disturbing increase in spiders. I may have seen more spiders this year, than all other years combined! I do not like spiders. I hate spiders! But seeing so many has almost made me loose my fear for spiders. But I still do not like them at all!

Summer is just a memory. Winter is probably on its way. Spring is only a rumour. This is autumn.
Regular visitors will notice the unstable delivery of blog posts. I expect improvements soon.

I keep a lot of stuff I really do not have any use for.
If you have the same problem, then maybe this might be a useful advice:

Only keep things that are useful or beautiful!

I intend to live by that rule – for a while or forever – and see where it takes me. 🙂