This is the first post in a small series about some of my inner demons. These posts can all be found under the category “me”. (This category isn’t written with a capital letter. When almost everything in this blog is about me, this category isn’t a beginning of a new sentence, but more like an elaboration).

I think people often mistake me for a deeply uncomplicated being. I don’t believe that is true. In fact, I tend to surprise myself, by doing something I would not expect from someone like me. Sometimes it is a negative surprise, but luckily there are positive surprises as well. Maybe I’ll write about some of them in future posts.

One of the greatest problems I have had to deal with is my knack of worry. I have spent so much time worrying about things that did not happen. And for some time I have even been worried about me spending so much time worrying about nothing. Even when the thing I had been worried about actually came true, it normally wasn’t half as bad as I had expected.

I know sayings like “Don’t worry, be happy” or “It is foolish to fear what you cannot avoid”.
And of course people have been telling me to lighten up – so easy to say, so impossible to do. I know it is ludicrous to worry about stuff beforehand, but that didn’t help.

A short time ago, I was a little to quick to do something before I had thought it through, and thereby making things worse instead of better. I was able to clean up my own mess, but that night I lay awake thinking of the possible consequences it could bring the next day. The next day nothing happened!

Maybe my worry-gene exploded that day.

It is too soon to tell, but it really seems like I have killed the worry demon inside me (ha! If it had been a little worried itself, it might have seen it coming). Most of the things I have been worrying about are still there, but I just don’t worry about them anymore.

Another positive thing about not worrying: I have been under stress lately, but that too has vanished: I still have more tasks than time, but I just can’t seem to worry.

From time to time I still find myself worrying about anything or nothing, but I’m not so worried about that anymore. 🙂

The snow we didn’t get this winter has finally arrived, just when everything should turn green.
More snow is on its way. For a short visit, I hope. 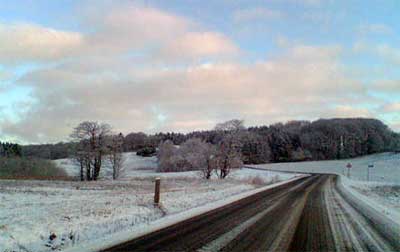 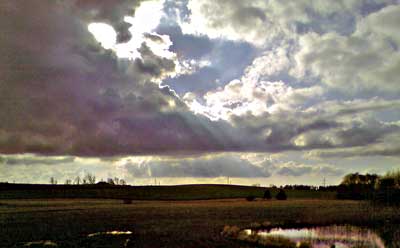 It’s such a beautiful Sunday with only three drops of rain, a pleasant temperature and clouds that just can’t stop the sun from shining on me.
I feel like singing, but won’t ruin the moment by doing so. 🙂

Every once in a while it is probably a good thing to think things through; to rethink your life.
For me, the time seems to be now. I’m not going through an existential crisis (I hope), but I haven’t done much reflection either.
I’ve felt kind of lost lately: Why did I end up where I did, and where do I go from here? To be lost isn’t necessarily a bad thing, but a sign that you no longer walk the familiar roads. Also, the only way to never get lost is to stand absolutely still. When you don’t go anywhere, you can’t get lost. On the other hand, I would like a little sense of direction, so I don’t have to twirl like leaves in the wind.
I haven’t reached this place in life because of carefully laid plans, but because I’ve been walking through open doors when other doors got slammed in my face (figural speaking). I’m not where I intended to be (I guess – I’m not totally sure about that either), but am I where I ought to be? That is the question. I hope to reach some sort of answer at some point in time. I hope to get some good answers, and that the “point in time” will occur soon.
In my quest for answers, I intent to use this blog from time to time to write a few notes about myself: where I have been and in which direction I’m going. That might seem awfully self-centred – and maybe even boring, but I need those notes to navigate.