As I wrote September 7th, I had my picture taken by an automatic traffic control, because I couldn’t keep the speed under the 50 km/h (approx. 31 mph).
I have now received a letter with the fine, together with the photo.
First: I know its irresponsible driving to fast. As I wrote earlier, I had just started the car, and would have noticed the speed myself and adjusted it accordingly – but to late. Yes I know: it’s no excuse.
Second: Luckily I wasn’t speeding that much – I have to pay for driving 8 km/h (5 mph) to fast. And again: yes, I know it’s still to fast.
Third: Even though the photo’s quite ugly to look at, it’s still the most expensive photo I have of my car. 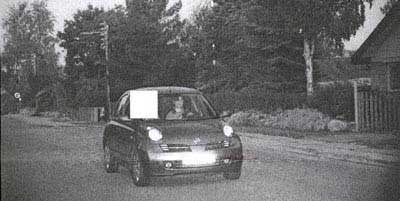